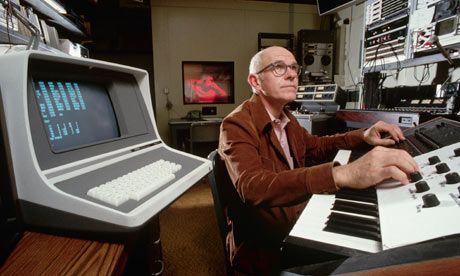 In the late 1950s computer music pioneer Dr. Max Mathews created MUSIC, the first widely used music synthesis program while working in the Acoustic Research Group at Bell Telephone Laboratories. Over the next forty years at Bell Labs and then at the Center for Computer Research in Music and Acoustics at Stanford University, Mathews advanced and refined digital computer music synthesis.
In this video Mathews describes and demonstrates his Radio Baton Controller and Conductor software program and performs brief selections by Bach, Chopin, Beethoven and Appleton.
A Radio Baton is an electronic instrument with two baton controllers and a receiving base called the antenna. In the end of each baton is a small radio transmitter. As the batons are moved over the receiving base, four antennas in the base are able to determine the batons’ location in three-dimensional space. The movement of the batons through space are converted into instructions determining how the music is to be synthesized.
The Radio Baton Conductor Model uses the model of an orchestra conductor controlling the musical tempo, dynamics and expression of the piece. The Conductor program puts the pitches and the durations of the notes in a score that the computer reads as a sequence of beats in the computer memory. The conductor can move the batons around with his two hands, controlling six variables, and assign these variables to whatever functions in the music are important at any instant of the music.
When asked if the radio baton was a successful instrument, Mathews answered, “I suspect actually it was too successful. It may have made music too easy to play. But my vision there, and the vision I think I got from John Chowning was that everyone could have his own orchestra and could interpret music according to his particular feelings about it. And that this might be a much more satisfying way than simply sitting and listening to a recording or simply listening to a concert in a concert hall.”